Αρχική Products Producers - Cooperatives Olive tree dedication ceremony in honor of Her Excellency Ambassador of the... 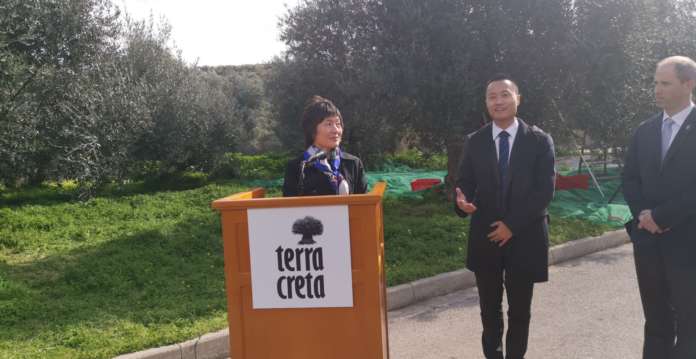 New agreements on foreign markets are being implemented by Terra Creta, a member of AVIAREPS Group.

In honor of the company’s extroversion, an olive tree dedication ceremony was held on Tuesday, February 11, in Kolymvari, Crete, honoring the Ambassador of the People’s Republic of China Zhang Qiyue

Vice Chancellor of Chania, Mr. N. Kalogeris, the Thematic Vice-Chancellor of the Department of Entrepreneurship, Commerce, Innovation and Social Economy, Mr. A. Papaderakis, the Mayor of Platanios, Mr. O. Of Chania Development, Mr. G. Nikiforakis, as well as the Director of the Orthodox Academy of Crete, Mr. K. Zorbas attended the event.

In her speech, the Ambassador of the People’s Republic of China, addressing Terra Creta, said that the know-how and high quality of its products are a guarantee of high growth in the Asian market. It is the ambition in China to promote its products and our embassy is ready to assist in any way possible

The Chinese Ambassador thanked the Terra Creta administration for the dedication of the olive tree, expressing her conviction that there would be further penetration of Greek products and in particular olive oil into the Chinese market. During her stay, she toured the company’s premises, attended a tasting seminar on olive oil, and visited the monumental Olive Tree of Vouves. ”

AVIAREPS Chairman of the Board, Mr. Stergios Pitsiorlas, said that “this event is another step in the very close and mutually beneficial relationship being built between Greece and China. He also added that the presence of the Chinese Ambassador at the Terra Creta facilities is of particular value because it is a tangible recognition of the role and the special focus of the AVIAREPS group, as well as an indication of further strengthening their cooperation. ”

Mr. Nektarios Dadis also said that after 2012 with the entry of the major shareholder of the AVIAREPS group, Mr Ioannis Grylos, the investments made by the company entered into a dynamic growth perspective.

The administration’s goals for the next decade are to take the lead in exports of  extra virgin olive oil, to make Terra Creta a more recognizable international brand, synonymous with quality and innovation, and to promote the sustainability of Cretan olive oil worldwide, its value and Greek diet worldwide.

General Manager Fotis Sousalis emphasized that Terra Creta is primarily export-oriented as products are exported to more than 45 countries and noted that in the coming years Terra Creta will invest even more in technology, innovation and sustainable development.