This website uses cookies to ensure you get the best experience on our website. More Info
OK
Αρχική Markets Dimitra Alieos talks to Vasilis Zampounis about the strong and weaker aspects... 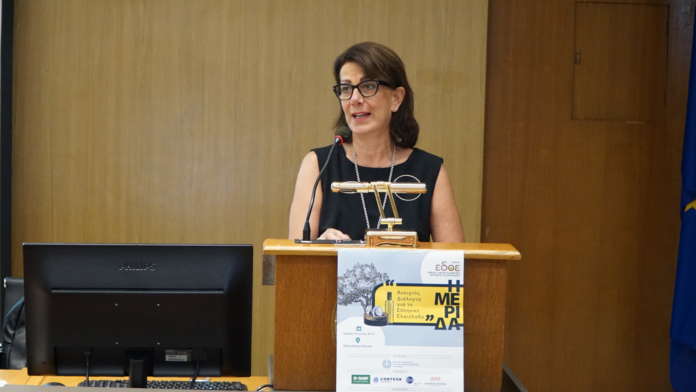 If ever there were an honourable ambassador for Greek olive oil, the position would surely belong to Dimitra Alieos, having worked intensely in the sector for 41 years. Working at SOVENA Espana, she has a difficult area of responsibility, namely the Eastern Mediterranean. Dimitra also possesses a deep knowledge of cooperatives, from which she buys thousands of tonnes of olive oil. SOVENA Espana is the largest economically heathy olive oil company in the world, and is owned by a Portuguese family and not by a multinational company or fund.

Dimitra Alieos is not only an outstanding marketing manager, she is also an exceptional scientist, with a doctorate in Economics. She is a founding member of the Scientific Society of Olive Encyclopaedists (4Ε), having written one of the most interesting chapters of the Encyclopaedia of Olive Oil “Olive oil policies of Mediterranean countries” (pp. 595-637).

Other countries make progress but competition is difficult.

(VZ): Ms Alieos you have the privilege and the extensive experience which gives you great knowledge about the olive oil sector in the entire Mediterranean region. How do you see the position of Greece, and the relationships between these countries?

(DA): Greek olive oil has lost ground over the past 30-40 years in international competition, not only against Spain (which today we are light years behind) and Italy (consistently behind) but also Tunisia (as a result of their national efforts in recent years), whilst Portugal, Turkey and Morocco are making steady progress.

This loss of competitiveness is reflected by indicators such as:

a) The very small share of Greek branded olive oil in the international market (USA etc.), now being compounded by smaller/more difficult presence of our bulk product (in Italy, and Spain).

b) Income of olive oil producers and profit of the processing and trade sectors are inadequate and vulnerable hence they cannot support or finance sustainable growth of the Greek olive oil sector despite the plethora of EU subsidies available.

Maintenance and improvement of quality is needed

(VZ): What is the cause of this continued loss of competitiveness of Greek olive oil? What are the most significant problems?

(DA): Olive oil from some regions of Greece continues to be in great demand. But what Greek producers need to focus on is protecting olive oil quality, mainly from improper application of pesticides. The adoption of Good Agricultural Practice in pesticide application is necessary because, as a result of the huge labeling/branding companies in Spain, mainly, and secondly Italian imports, there are now laboratories with very strict monitoring protocols for pesticide residues. An industry of this size is obliged to adapt to the demands of the large multinational supermarket chains they supply, which in turn place ever tighter standards on the quality and “purity” of products on their shelves.

Another defining development is that of technological progress, primarily in Spain, with the creation of new cultivars, and optimal cultivation of trees, and of processes following harvest and olive oil extraction. These all lead to continual improvement of the quality of Spanish olive oil, which competes with Greek olive oil, and which, to an ever increasing degree, is able to meet labeling/branding needs.

All the time the manufacturing companies are served by “convenient” Spanish raw material, the more restricted will be the proportion of Greek olive oil used in blending.

We should also not overlook the fact that Tunisia has managed to achieve tariff-free exports to the EU of 85,000 tonnes of olive oil. Being amongst the early harvesting countries, Tunisia covers the initial needs of the largest labeling/branding companies, under simpler trade terms, with larger contracts and future prospects. If we suppose an Italian wants to buy 1,000 tonnes of extra-virgin olive oil in October-January, they will prefer to draw up one or two agreements with Tunisia rather than 35 individual contracts for each container from the Greek market.

Ultimately, only sources from specific regions and cultivars can preserve the sustainability of Greek olive oil. Unfortunately, as the decades have gone by, the enthusiastic Italian labelling/branding companies, who basically created the particular demand for pure Greek olive oil, either for direct branding or for blending, are disappearing.

On the creation of a National Olive Oil Council

(VZ): There is much discussion in Greece on olive oil policy and the need for a national strategy. What do you believe should be the main Greek priorities?

(DA): I would see one Greek priority to be a major institutional change with the creation of a National Olive Oil Council, comprising farmers, oil producers, labelling/branding companies, traders and scientists expert on the product and the international market, with the Ministry playing a coordinating role. This council should define a strategy, advise the Ministry, and have many other activities, amongst which, most urgently is that of attending and actively participating in the International Olive Oil Council (IOC). Given that an international council exists, how can there be

no national one as a natural extension of this? This is where it is apparent that olive oil and table olives need to come under the same roof, as in the IOC. As 4E, we have submitted a relevant memorandum to the Ministry and hope that it will be accepted.

We are an agricultural country, in which olives and olive oil are basic “national products”; these therefore demand appropriate attention. The example to follow for this type of organisation is Spain, which Tunisia is now following, and which concentrated on an olive oil policy and is starting to reap its rewards, while Turkey is rapidly catching up. It is not simply a coincidence that these three countries have key positions in the IOC from which Greece is absent, as it also has been in recent years from the olive oil service of the Commission.

(DA): World production in 2019/20 in combination with the high stocks of the current harvest will be able to meet consumer needs.

Estimation of production by country is as follows (×103 tonnes):

If the quantities from each country are combined, then the sum of the new harvest of 2019/20 totals 3,250,000 tonnes, added to the stocks of 850,000, this gives a grand total of 4,100,000 tonnes, which does not predispose to any sudden increase in prices, rather more an expectation of around 2.40-2.60 for the usual qualities of extra-virgin olive oil at the beginning of production and a natural fall in prices after January.

Tunisia is already offering contracts for November/December at 2.15-2.25 for extra-virgin oil, which, in combination with Spanish futures, gives us an indication of market prices, if there are no surprises of course.

(This interview took place on 10th October, before it was learnt that the EU plans to allow Spain to set up private stocking to the tune of up to 300,000 tonnes. Vassilis Zampounis is publisher of the magazine Olive & Olive Oil, and the site olivenews.gr, and is on the Board Directors of 4E.)